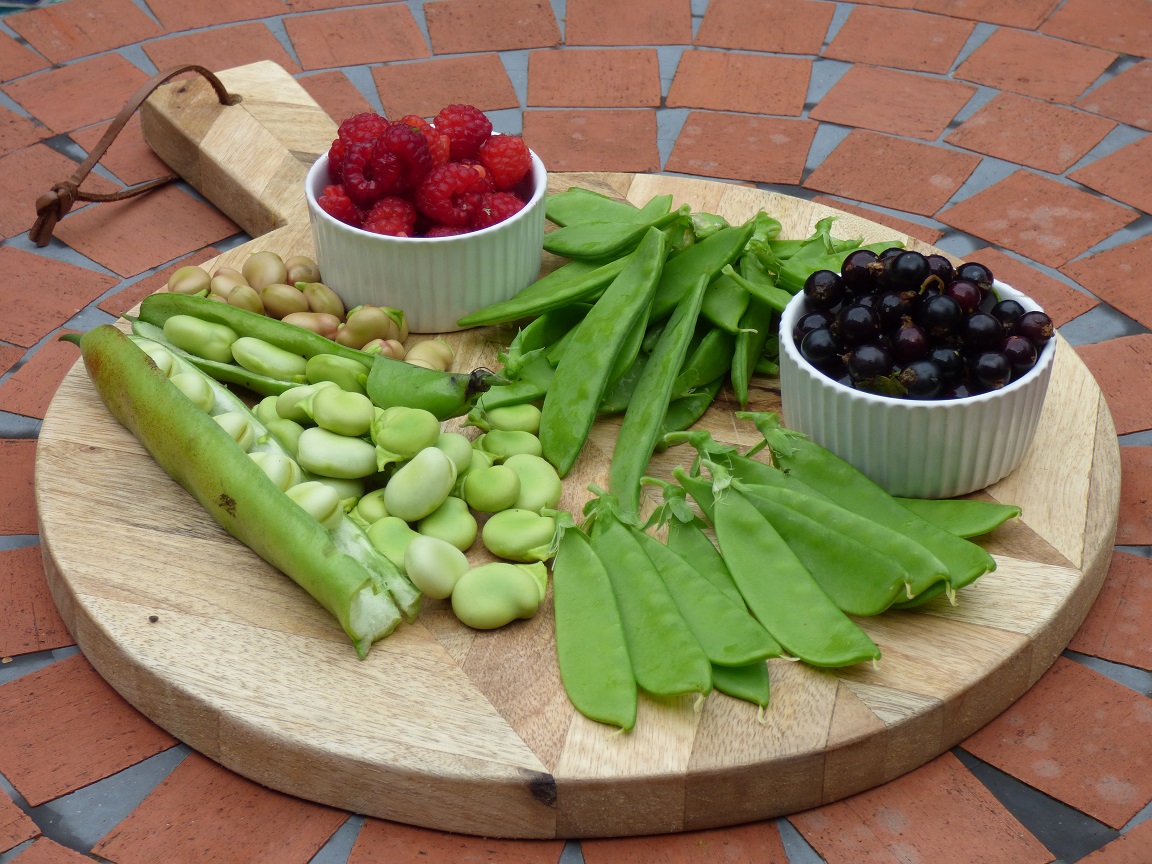 With so much to talk about in the flower garden the fruit and vegetables seldom get a mention. This year the vegetable garden seems to have really got going. Whether this is the result of the earlier hot temperatures, the current wet weather or simply the fact that I have had much more time to do things better this year I am not sure.

To celebrate the fact that we are picking good produce daily now I thought I would highlight six crops that we have enjoyed this week. It has also been an interesting exercise trying to create some attractive photos of fruit and veg to post!

I think I would describe the raspberry canes as a little feral now. They are growing at least six feet away from where I originally planted them. I wrote earlier in the week about our new decorative walk-in fruit cage project so next year we hope to have a much better crop of larger berries. However, we are still enjoying the old ones with lashings of cream and sugar. You really cannot beat fresh raspberries!

I have grown three varieties of broad beans this year and managed to sow them in succession. The varieties this year are Sciabola Verde, Red Epicure and Express. All are growing strongly and don’t seem to have been bothered by black fly this year. I have also done a much better job at supporting them which has helped reduce the damage to the pods from mice and voles. The picture shows the larger green beans of Sciabola verde and the small tender red beans of Red Epicure. There is something rather attractive about their silky skins.

We have suffered very little from slug damage this year (so far) and the lettuces have really grown away strongly. We have concentrated on an Iceberg variety called Match. This is producing nice, clean crisp leaves. Although not strictly a ‘cut and come again’ variety I have been able to remove just the leaves we want for a meal and leave the remaining plants to develop further. 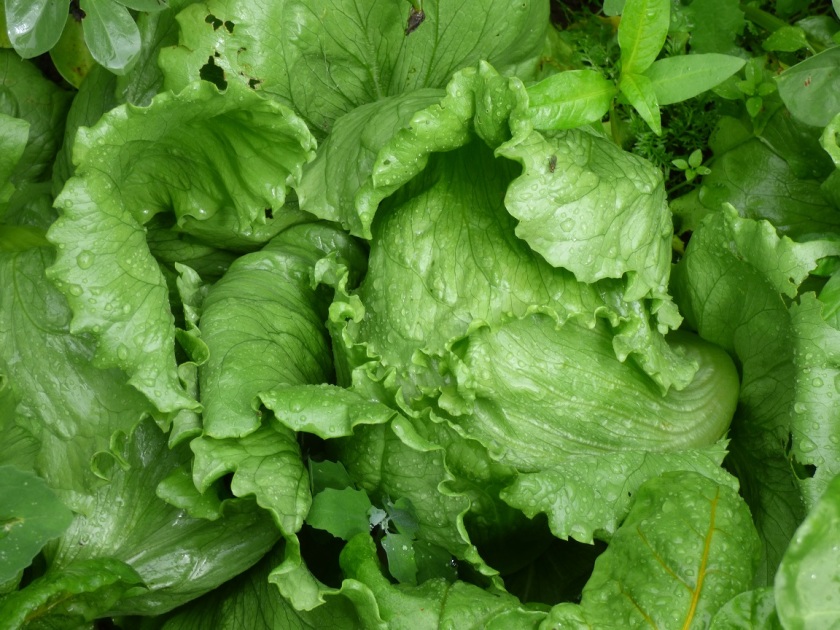 These have been a real success. The fact that I have had the time to carefully pick the pods every day has ment that they have kept coming and continue to crop extremely well. We are getting a small bowl full every day now off a three metre row. The variety is Oregon Sugar Pod.

We do seem to have a lot of wood pigeons in the garden this year and normally it would be a challenge to keep them off the crops. However, I have dusted off my trusty bird scarers made of old shiny CDs and DVDs and they seem to have worked a treat. ‘Back in the day’ when you used to receive loads of free CDs through the post from Internet Service Providers like AOL and Tiscali I had a huge stack of these but they are now beginning to run a bit short I am afraid. 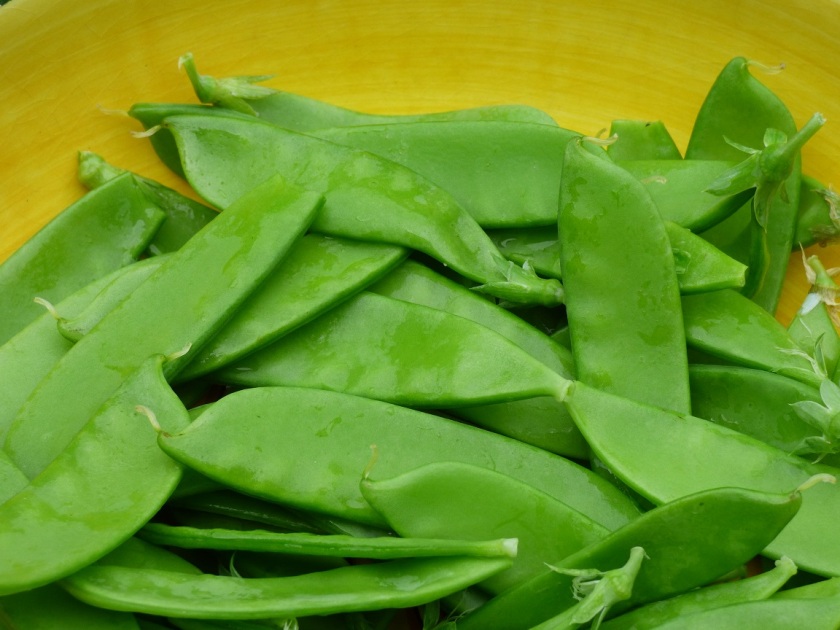 We grow a lot of Swiss Chard and Perpetual Spinach in the vegetable garden and it crops reliably right through the summer and autumn. They also produce harvestable leaves throughout the winter months and it is lovely to have some fresh veg to pick at this time.

Not only are they very productive but the Swiss Chard (variety Bright Lights) is also very attractive with its bright red, yellow and white stems. I would highly recommend this Salmon and Swiss Chard Pie recipe that we found the tried the other day. Easy to make and very tasty.

Usually the birds do not trouble my blackcurrants but last year they suddenly took the lot when I wasn’t looking. I am trying to get ahead of the game this year by picking and freezing the currants as they ripen. Picking blackcurrants is certainly a time consuming business and you cannot rush it (otherwise you end up dropping the lot on the ground whilst you seek out the next bunch to pick).

Because of the lack of rain the currants are not as big as they might have been in previous years but hopefully they will still pack a punch. I have noticed that they have suddenly started to swell and split with the recent rain. Still usuable but they will need to be picked before they spoil.

Although we do love a blackcurrent and apple pie the bulk of our currants go to make blackcurrant jelly. We freeze the fresh berries as we pick them until we have a large enough amount to make up a batch of jam. Blackcurrant jelly on warm buttered toast at the breakfast table – always good!

All in all the fruit and vegetables are growing well. Each year something goes wrong though and this year it has been the cucumbers. All five super plants have suffered from wilt I’m afraid and had to be chucked out. Such a shame as they usually grow so well for us.

And to finish, a little nostalgia. I do find podding broad beans at the end of a busy day with a glass of good beer a very civilised summer activity. It also brings back memories of my (then) young children singing this harvest song at the top of their voices in primary school assembly:

The apples are ripe and the plums are red
The broadbeans are sleeping in their blankety bed, Yea!

The Six on Saturday meme is hosted by The Propagator. Click on the link to be inspired by what other plant lovers are enjoying this weekend.